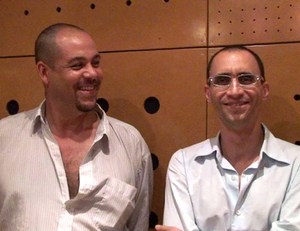 Tel Aviv based guitarist and oudist Amos Hoffman started playing guitar at the age of 6, and oud a few years later. He studied guitar privately, and attended the prestigious Rubin Academy of Music in Jerusalem. His search for new musical experiences led him first to Amsterdam, and then to New York City, where he recorded his first album – The Dreamer in 1998 (Fresh Sound). Since returning to Israel in 1999, he has recorded and released Na’ama – 2004 (Magda), a classically inspired disk featuring the oud, Evolution – 2008 (RazDaz) and upcoming release, Carving (RazDaz). Amos currently tours in bassist Avishai Cohen’s band.Shai Bachar was born in Jerusalem in 1971 and began playing music at the age of five. Growing up in a multi-cultural environment exposed him to a wide variety of influences such as Middle Eastern traditional music, Classical music and Jazz. His rare ability to absorb these influences and mold them into his own unique voice won him world wide recognition and led to collaborations with such notable artists as Sheila Jordan, Bob Moses, Oliver Lake, and Bill Dixon from the USA; Othello Molineaux from Trinidad; Sekouba Bambino and Ibrahim Sumano from Guinea, West Africa. Shai has been living and playing in New York City since 1998 where he is an active and highly appreciated musician. For the past years he has been performing extensively nationwide with Orlando Marlin’s Afro-Cuban Latin-Jazz group, and touring with world renowned guitarist Yosi Piamenta’s Oriental Sephardic Jewish Music group, in Europe, South America and the Far-East.

Hayyim Nahman Bialik (1873-1934) was considered one of the “fathers of Modern Hebrew poetry,” creating a secular Jewish literature much inspired by, and standing next to the traditional liturgical and sacred writings of the Jewish people. Several of his “lighter” poems are collected as “songs and verses” and, because of their simple structure they lend themselves easily to song settings. “Bein Nahar Prat” is among these, and was adapted to the melody of an Oriental folk song by Yemenite singer Bracha Zefira (1910-1990).

Prof. Rina Zaizov Marx, a brilliant scientist, and an outstanding physician endowed with the highest standards of skill, compassion and virtue, laid the foundations for Pediatric Oncology in Israel and was the first director of the Hematology-Oncology Department at Schneider Children’s. She served as the Chief Consultant for Pediatric Hematology Oncology at Clalit Health Services, and is the Incumbent of the Josefina Maus and Gabriela Caserman Maus Chair in Pediatric Hematology-Oncology, Sackler School of Medicine, Tel Aviv University. Prof. Zaizov Marx was an exemplary researcher of international renown, who spearheaded new protocols in the treatment of childhood cancer. Alongside development of her academic and scientific skills, Prof. Zaizov Marx fostered community outreach through the strengthening of ties between the medical team, the patients and their families, and the community. Towards this end, she founded a public association of parents of sick children called “Amutat Chaim”, which has become an integral element in the treatment of children.

by Amos Hoffman and Shai Bachar