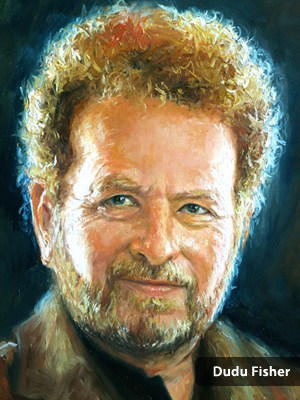 The son of a Holocaust survivor, David “Dudu” Fisher was born in Petah Tikva, Israel. He studied at the Tel Aviv Academy of Music, and then took up the cantorial position at the Great Synagogue in Tel Aviv, followed by four years in South Africa. For over 20 years, Fisher was the cantor at Kutsher’s Hotel in the Catskills during the Jewish high holidays. In 2005 Fisher became the Chief Cantor of New York Synagogue. Fisher played the role of Jean Valjean in Les Misérables in Israel from 1987 to 1990, and made local fame. He played the role on New York’s Broadway during the winter of 1993-4, and later at London’s West End, where he was invited to perform before Queen Elizabeth II. He has performed for President Clinton, Britain’s Royal family, and for the Thai Royal family. In May 2009 Fisher sang, along with contratenor David D’Or, for Pope Benedict XVI as the Pope visited Israel.

Saleinu takes its cue from the lively hora that was so popular in Israel, and especially on the kibbutzim. The song, which describes the joy of the harvesters as they celebrate their first fruits, has become closely tied with the agricultural side of the holiday of Shavuot. Born in Ukraine, Levin Kipnis (1894-1990) saw his first children’s magazine at age 13. Six years later, he made aliyah, and discovered, to his dismay, that there were no similar publications for Israeli children. Kipnis devoted his career to filling this void. Kipnis won the coveted Israel Prize in 1978 for his lifetime of devotion to children’s literature. Yedidyah Admon (Gorochov)(1894-1985) was born in Russia and made his aliyah with his family at the age of 12. He was a member of the first graduating class of the Teacher’s Seminary in Jerusalem, where he studied with renowned Jewish ethnomusicologist, Abraham Z. Idelsohn. However, Admon is best known for the many songs he has written under the influence of the local Arabic and Bedouin sounds.

Ezer Mizion, the Israel Health Support Organization, offers an extensive range of medical and social support services to help Israel’s sick, disabled, elderly and underprivileged populations. Since its founding in 1979, Ezer Mizion has grown to become one of the largest non-profit organizations in Israel, benefiting over 650,000 people every year. Ezer Mizion has branches in over 20 cities throughout Israel, with over 11,000 volunteers and an annual budget of over US$20 million. Ezer Mizion’s diverse line-up of services includes the world’s largest Jewish Bone Marrow Donor Registry and specialized programs for children with special needs, cancer patients, the elderly, and terror victims