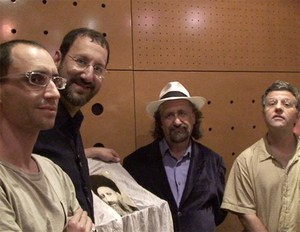 Greg Wall’s Later Prophets, features Greg Wall on tenor sax & clarinet, Shai Bachar on keyboards, Ilan Kachkaon drums, and David Richards on bass. The Ha’Orot/Rav Kook project features Rabbi Itzchak Marmorstein on spoken word/vocals. Saxophonist, clarinetist,composer and producer Rabbi Greg Wall has been a leading figure in the Jewish Music scene since the late seventies. A veteran of countless bands, he is co-founder and leader of the acclaimed Hasidic New Wave (with whom he has recorded five great cds for the KnitFac label), and was one of the first musicians to blend Jewish Music with Jazz. Later Prophets, one of his favorite projects, is one of his best. The musicians have been playing together many years, and have developed an uncanny rapport, and a huge melodic, rhythmic, and sonic palette. Their eponymously titled Tzadik release is dramatic and powerful collection of originals and spiritual songs inspired by the story of Ezekiel, whose prophecy resurrecting dry bones after the destruction of the temple contains a great message of hope. The poetry of Rav Kook was the subject of their Tzadik release,Ha’Orot:The Lights of Rav Kook, and featured Aaron Alexander on drums.

Rabbi Avraham Itzchak HaCohen Kook, TZ’L (1865-1935) was the first Chief Rabbi of the reborn Land Of Israel and the most profound sage/spiritual leader of our epoch. He wrote this poem in Europe around 1902, shortly before he first came to Israel in 1904. Our recording presents the beginning of the poem which continues for 42 verses! The poem, based on Psalm 48 is remarkably prophetic given the current situation between Israel and the world.