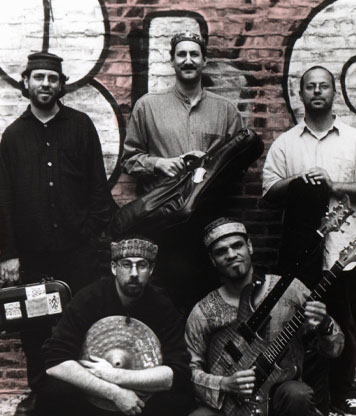 When five Downtown New York improvisers with deep roots in the jazz tradition embrace the Hasidic musical legacy and the scintillating rhythms of the holy land, a new voice emerges. Blending together an intense mixture of ethnic and cosmopolitan sounds, Hasidic New Wave fuses spiritual songs from Hasidic dynasties to funk and jazz, Arabic dances with avant-garde rock, and juxtaposes horas and freylekhs with sheer improvisation. Led by Greg Wall on saxophone and Frank London on trumpet, the band features David Fiuczynski on guitar, Fima Ephron on bass, and aaron Alexander on drums.

Holem Tza’adi was written by Mordechai Zeira (1905 – 1968), with lyrics by Yitzchak (Shenberg) Shenhar (1902-1957). Both made aliyah from Russia at the age of 19, and devoted themselves to the cultural life of the yishuv. Zeira is considered to be among the “fathers of Israeli song,” a “troubadour” who traveled the length and breadth of the country, singing his songs, while Shenhar wrote song lyrics and other poetry, in addition to stories and dramatic works. Holem Tza’adi is sometimes called “Shirat HaShomer,” a song of the watchman. The opening section reflects the guard in his reveries, while the energy of the second section represents his readiness to meet any challenge. Despite borrowing the indigenous sounds of the local Arabs, the song captures the spirit of the pioneers. It also captured the imaginations of the Diaspora Jews, who learned it through the educational and fund-raising activities of the Keren Kayemet in their efforts to raise support for the foundling Jewish settlement.

RCCS incorporated as a non-profit 501 c (3) charity in 1997 with a five-point mandate to help cancer victims secure the best health insurance policies possible, provide whatever financial assistance is needed to maintain health insurance policies, keep abreast of the newest and most effective cancer treatments, provide the best medical referrals and advocate for the cancer patient and the patient’s entire family. Since then, RCCS has grown, family by family, community by community. Many patients have been referred by their doctors, others by their families and friends, others by their rabbanim. RCCS has attracted donors and volunteers from nearly every community. Dozens of donors have been so touched by RCCS’s lifesaving work that they have undertaken the entire cost of a health insurance policy for one sick patient. RCCS has never declined a valid application for help. Its singular mission, duplicated by no other organization, has helped save the lives of over one thousand cancer patients across the United States.