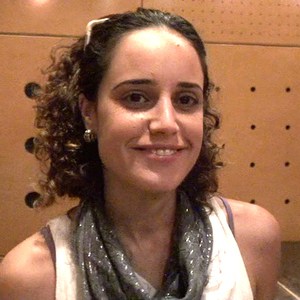 Inbal has been involved in the arts since childhood. She plays the piano, studied ballet for ten years, sang in choirs and acted in plays. As a soldier in the IDF, Inbal served as the lead singer in a military band. She writes and composes her own songs, and since 2004 has performed as the lead singer with the Taglit Birthright project. Other performances in Israel and abroad include the grand opening of Israel’s renewed international airport, a concert at the Israeli President’s Residence, a duet with Boaz Sharabi, Los Angeles’ Paramount Studios, and “From Vision to Reality” in September 2008. Inbal is currently recording her first solo album, produced by Adi Hayat.

Contribution to: Larger Than Life

Chaim Nachman Bialik’s poem, Hachnisini Tachat Knafech was first published in 1905, during the period of the Second Aliyah. The pioneers were busy working the land and learning their new language, and not necessarily musically creative, so it was common for them to juxtapose new poetic texts with melodies familiar to them from their roots in Eastern Europe. In this way, new songs were born, and easily transmitted among the early settlements. Bialik (1873-1934) is recognized as one of the fathers of Modern Hebrew literature. Born in Russia into a traditional Jewish household, he received a yeshiva education, and was well versed in the Talmud and the Bible. Although he departed from careful Jewish observance as an adult, his familiarity with traditional sources reveals itself in frequent references in his work to phrases and imagery from the texts he studied in his youth.

About Larger Than Life