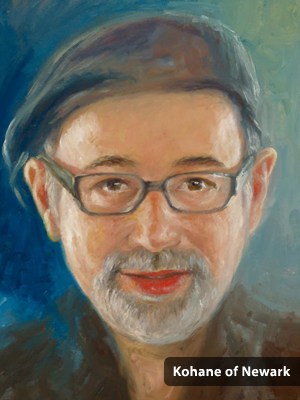 Enlisting a veritable Who’s Who of underground NY music legends, Kohane of Newark’s (aka Ricky Orbach) critically acclaimed alt-rock operetta “New Midlife Crisis” introduces listeners to the aural landscape and lyric mythology of an American-Jewish middle class experience gone awry in a way that a Velvet Underground fan might appreciate. Guitar genius Gary Lucas calls it “Killer Jew-punk…musical manna from heaven” The Forward describes Ricky’s art as a “…cholent of angst and wisdom” while Steven Lee Beeber – author of “A Secret History of Jewish Punk” – compares Orbach to “An American Serge Gainsbourg.”

Yad Anuga has an interesting history. Its text comes from a poem, “Et Kol Liba Masra Lo” (She Gave Him All Her Heart) by the peripatetic Zionist writer Zalman Shneur (1887-1959), which first appeared in a London periodical called HaMe’orer (The Awakener) in 1906. The poem became known throughout the Jewish communities of Europe, and it was apparently in Vilna, during the first decade of the 20th century, that it was first sung — to an entirely different melody. Meanwhile, the poem made its way to Palestine where, like so many other texts, it “acquired” its commonly heard tune, attributed to the Bedouin folk tradition. When the “new” version made its way back to Europe it replaced the “original” melody, and became well known as a “song of the pioneers.” It has appeared in print with the “new” tune since the 1920’s.

Saint Barnabas Medical Center provides a full scope of cancer-related services, and a staff of physicians that represents each of the oncology-related specialties. These specialties include general surgery and the surgical subspecialties.

by Kohane of Newark