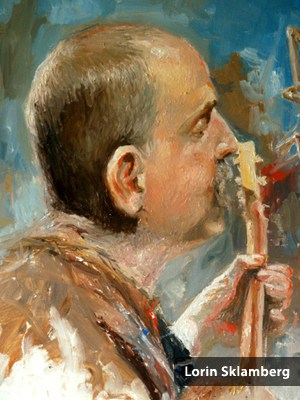 Lorin Sklamberg has been the lead singer of the Grammy Award winning Jewish American roots band the Klezmatics since its founding during the heyday of the alternative music scene in New York’s East Village in the mid 1980s. His work as vocalist, composer and multi-instrumentalist can be heard on some 50 recordings, solo and in collaboration with such diverse artists as Itzhak Perlman, Don Byron, Uri Caine, Matt Darriau, Frank London, Rob Schwimmer, Jane Siberry, Marc Cohn, Tony Kushner, Moxy Früvous, the Western Wind and, of course, the Klezmatics. Lorin appears here with cellist Ben Kalb.

Contribution to: Cancer patients of the Phyllis Newman Health Initiative

Lu Hayiti Tzipor Kanaf was among the many songs that helped the children of the Yishuv to learn Hebrew. It was the product of two individuals who were apparently not otherwise active in music: Lyricist Noah Pines wa s the son of the famous Rabbi Yechiel Micahel Pines, an early leader in the religious Zionist movement; composer N. Heifetz seems to be unknown apart from this melody. The anonymity of the originators of the song did not detract from its popularity, though: It was well-enough known that it was included in a gala program of “hits” from the pre-State era sponsored by Kol Yisrael Broadcasting in 1960. Sh’chav B’ni draws its melody from a tune by Rabbi Shalom Charitonov of Nikolaev, Russia, used by the Lubavitcher Hasidim there to sing the Yom Kippur piyyut (religious poem) Ki Hiney KaChomer. The text is attributed to Emanuel HaRusi (1903-1979) who hailed from Nikolaev, where he must have heard the tune. HaRusi (“the Russian”), who immigrated to Israel at the age of 21, was not affiliated there with any particular religious community, though, and in fact, was among the founders, in 1928, of the satirical theater “HaMatate” (The Broom) in Tel Aviv. Shchav B’ni was first heard in a 1930 production there, and its success seems to have been based on the popularity of the theater among the growing population of immigrants in the Yishuv.

About Cancer patients of the Phyllis Newman Health Initiative

The Phyllis Newman Women’s Health Initiative (PNWHI) was created to address the myriad of concerns women face when dealing with a serious medical condition. When women come to The Fund after a serious medical diagnosis they are often overwhelmed with concerns about their ability to work, family issues, managing basic bills as well as medical bills, and coping both physically and mentally with a challenging medical situation.