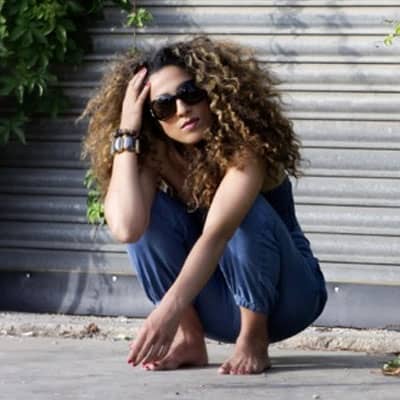 Israeli born “Michal Cohen, a female vocalist who has a hauntingly angelic voice…” (Andrew Griffin, The Town Talk). Her range extends from ancient Yemenite songs through to contemporary. Her performing experience includes Carnegie Hall, Merkin Hall, Jazz Standard, Jewish History Museum, The Philadelphia Museum of Art, Symphony Space, Scullers, and Joe’s Pub. She has toured widely, including the Moers New Music Festival, Avivir Festival, Festival Del Desierto, San Luis Potosi in Mexico, Ottawa Folk Festival in Canada, Tamaulipas World Music Festival in Mexico, as well as the Far East. Michal has collaborated with Meredith Monk, Uri Caine, Pittsburgh Symphony Orchestra, DJ Cheb I Sabbah, Jazzhole, Avi Elbaz, Guillermo Nojechowicz, and Frank London. Her vocals have appeared on a few movies: “Sharon”, “Souvenirs”, “Pathos”, “Historias Minimas”, and “Divan”. She was featured in a program of original electronic music in the German capital – Berlin, on NPR, WMRD-AM, Forward, WHRV, WUST-AM, PBS, and the ‘Voice of Music’. Besides English, Yemenite, and Hebrew, Michal has sung in Bulgarian, Spanish, French, Turkish, Yiddish and Portuguese. She is the recipient of a “Finalist” from the John Lennon Songwriting Contest, as well as The Vocal-Jazz Cleo Laine Award. Michal is currenly living in Israel and about to put out a new CD of original music in Hebrew.

Contribution to: One In Nine

Maimonides (Rabbi Moses ben Maimon (1135-1204) was among the great Torah commentators and interpreters of Jewish law. His formulation of the “Thirteen Articles of Faith” codifies the various tenets of belief to which most traditional Jews adhere, the most famous (often excerpted, and set to various melodies) attests to complete belief in the coming of the Messiah. The religious pioneers who flocked to Palestine during the second aliyah believed that in rebuilding the land of Israel they were hastening the coming of the Messianic era. But not all of the pioneers were invested with religious fervor. Indeed, many of the early settlers were nationalists, simply seeking a place where Jews could have a homeland, like everyone else. Their belief was not in the eventual arrival of a Messiah who would redeem them from persecution, but in the power of men (and women) to build their own future. For them, the secular poetry of Saul Tchernichowsky (1875-1943) resonated much more than any liturgical tradition. According to Israeli poet Avraham Shlonsky, Tchernichowsky visited his family’s home in Russia in 1892, shortly after composing the verses, and Shlonsky’s father, Tuvia, (1874-1929) adapted a pre-existing melody to suit the new text. In this setting, the song became enormously popular in the yishuv, along-side more traditionally oriented songs like “Eliyahu HaNavi,” “V’Taher Libenu” and “El Yivneh HaGalil.”

About One In Nine

One in Nine, a registered non-profit organization, has set itself the following goals: to position breast cancer and breast health awareness on the national agenda in Israel, to improve the services and support mechanisms available to women with breast cancer and those close to them, and to empower women to assume responsibility for their health and encourage them to become assertive health service consumers. Nurit Tolnai established One in Nine following her recovery from the disease. She decided to take action after facing numerous difficulties during her own recovery process. Subsequently many additional breast cancer survivors joined the Association, spurred on by their own journeys of recovery and a determination to help others. Their joint contribution in terms of experience and support has become a pillar of strength for other women coping with (and beating) breast cancer.