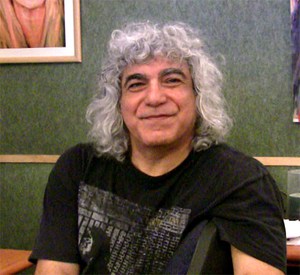 Natan Cohen was born on the 5th of July 1952 in Jerusalem and he has been performing more than 28 years on stages in Israel and other countries.During his military service, Cohen was a part of the Combat Engineering unit band and during this time he began working with Matti Caspi. During this time he composed two of his most well known songs” “Pure Souls Street” and “Soon “.Natan Cohen released a few solo albums and was most recognized as the leader of the band “Pure Souls” (Neshamot Hatehorot) for whom he composed and arranged nearly all of their songs.

Lo Bayom V’lo BaLaylah is from his collection of “folk poems” that Chaim Nachman Bialik wrote across several decades. This poem, one of his last, written in 1933, returns to the flavor of the Song of Songs which the poet had used as the model for several of his earlier poetry in this genre. It is likely inspired by a similar Yiddish poem, which references not the acacia, which grows in warmer climates, like that of Tel Aviv, but the sturdy oak, common in Eastern Europe. Bialik (1873-1934) is recognized as one of the fathers of Modern Hebrew literature. Born in Russia into a traditional Jewish household, he received a yeshiva education, and was well versed in the Talmud and the Bible. Although he departed from careful Jewish observance as an adult, his familiarity with traditional sources reveals itself in frequent references in his work to phrases and imagery from the texts he studied in his youth.

The Israel Cancer Association (ICA) was founded in 1952. More then 50 years of involvement and a proud record of achievement have earned ICA widespread recognition, both nationally and internationally, as a prime leader in the fight against cancer. ICA set its goal to reduce the mortality and morbidity rates of cancer by waging an encompassing fight – by promoting research, prevention and early detection,improved methods of treatment and rehabilitation and quality of life. We support cancer patients throughout their ordeal and we strive to ensure their rights. The ICA is in the forefront in the fight against cancer initiating and implementing essential long-term, nationwide programs and goals for the benefit of all cancer patients and their families, in every sector and in every locale throughout the country.