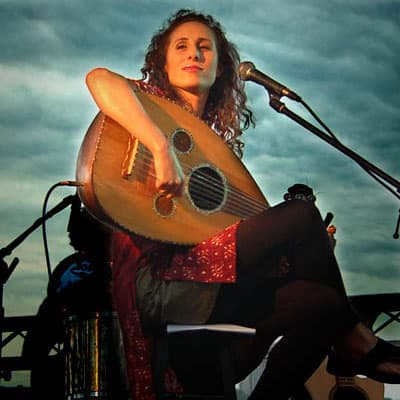 Pharaoh’s Daughter has toured extensively through America, Eastern and Western Europe, as well as Greece and the UK. When she’s not touring or performing, Basya plays darbuka, riq and frame drum as part of the B’nai Jeshurun music ensemble that accompanies Friday night services. Basya was the recipient of numerous compositional and project grants from NYSCA (New York State Council of the Arts) American Composers Forum (for Trance, and multilayered sound and video installation collaboration with filmmaker Pearl Gluck) and the American Music Center.

Hineh Achalelah (aka “Shirat HeChalil”) is one of many “tributes” to the shepherd’s flute that was part of Israel’s song literature during the pre-State era. This particular melody was penned by Mordechai Zeira (1905 – 1968) who arrived in Israel in 1924, at the beginning of the 4th aliyah, an era known for the transition from “folk melodies” to “composed” song literature. Zeira has been lovingly referred to as the ‘father of Israeli folk song’ and as a “troubadour” who traveled the length and breadth of Israel, popularizing his songs.