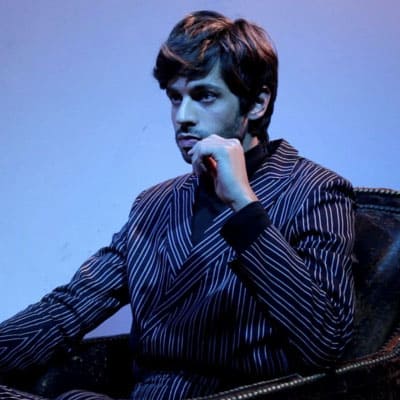 Shay Gabso is an Israeli singer. He rose to fame, as 2nd runner up of the first season of Kokhav Nolad (“A Star is Born”, similar to ‘American Idol’). His single “Arim Roshi” is often used as a poster song for the IDF and the war against Hezbollah.The song he chose to record was “Another Day or Two”, which he wrote and composed himself. The song was a hit, leading to eight weeks in the Israeli music charts. After this, came the single “Missing Words” and “I will lift my Head”, which were also successful. In May 2004, Gabso released his debut album, “I’ll lift my head”, in which most of the songs were written and composed by Gabso. The album reached gold record status. He won the Song of the Year award for his song “Day and Two Days” in the Reshet Gimel charts. Gabso was chosen as the Best New Artist of the Year in Galey Tsahal and Galgalatz radio stations. In June 2006, Gabso released his second album, “Instead of Me”

El HaTzipor was written in the spring of 1891, when Chaim Nachman Bialik was still a student at the Volozhin Yeshiva. Volozhin was a unique institution that reflected Haskalah (Enlightenment) thinking, and enabled Bialik to pursue secular studies in literature and philosophy as well as the traditional Judaic sources. The school leaders and their students were also involved in the Hov’vevei Tziyon movement, and Bialik, in particular, was moved by the writing of Ahad Ha’am, who not only advocated settlement in Palestine, but the development of a cadre of “elite leadership ready to devote their lives to the cause.” El HaTzipor was Bialik’s first poem, and in it he pours out his soul to the bird that flies back and forth between the Holy Land and the Diaspora. The unattributed European folk melody to which the poem is sung preserves the Ashkenazic meter of Bialik’s verses, while the poet’s lyrics, themselves, are strongly influenced by traditional biblical, Talmudic and liturgical images of the ancient homeland. Bialik (1873-1934) is recognized as one of the fathers of Modern Hebrew literature. Born in Russia into a traditional Jewish household, he received a yeshiva education, and was well versed in the Talmud and the Bible. Although he departed from careful Jewish observance as an adult, his familiarity with traditional sources reveals itself in frequent references in his work to phrases and imagery from the texts he studied in his youth.

Rambam Health Care Campus (RHCC) established in 1938, the largest medical center in northern Israel was named for Rabbi Moshe Ben-Maimon “the RAMBAM”, the greatest Jewish physician of ancient times. RHCC serves as a referral medical center, unifying all fields of medical science and employing a multidisciplinary approach to diagnosis and treatment. Some 75,000 people are hospitalized at RHCC each year, with another 500,000 treated in its outpatient clinics and medical institutes. RHCC also serves as the principal medical facility for the Northern Command of the Israel Defense Forces. The medical center comprises 36 departments with some 1000 beds, 45 medical units, 9 institutes, 6 laboratories and 30 administrative and maintenance departments. Among RHCC departments, some are the exclusive providers of comprehensive services for all of northern Israel, including trauma treatment, oncology, and neurosurgery.