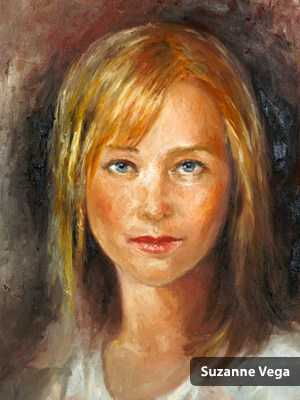 Suzanne Nadine Vega (born July 11, 1959) is an American songwriter and singer known for her eclectic folk-inspired music. Two of Vega’s songs (both from her second album Solitude Standing, 1987) reached the top 10 of various international chart listings: “Luka” and “Tom’s Diner”. The latter was originally an a cappella version on Vega’s album, which was then remade in 1990 as a dance track produced by the British dance production team DNA.
(http://en.wikipedia.org/wiki/Suzanne_Vega)

Song: The Streets of Laredo

Contribution to: Hospice of the North Shore & Grea

Streets of Laredo, also known as the “Cowboy’s Lament”, is a famous American cowboy ballad in which a dying cowboy tells his story to a living one. Derived from the English folk song “The Unfortunate Lad”, it has become a folk music standard, and as such has been performed, recorded and adapted numerous times, with many variations. (from wikipedia.org).Suzanne Vega (vocals), Gerry Leonard (guitar), Gilad (drums), Dave Richards (engineer), Beth Ravin (producer).

About Hospice of the North Shore & Greater Boston

Founded in 1978 as an independent, not-for-profit organization, Hospice of the North Shore & Greater Boston is the largest and most comprehensive hospice provider in Massachusetts. With the mission of providing expert care, support, education and consultation to those affected by life-limiting illness, death and loss, Hospice of the North Shore & Greater Boston provides hospice and palliative care services to patients in 86 cities and towns at home, long term care and assisted living communities, and in the Kaplan Family Hospice House in Danvers, MA. Our Bertolon Center for Grief & Healing offers grief and bereavement counseling and support groups for anyone experiencing the death of a loved one and a summer camp program for bereaved children and their families. For more information please visit www.hns.org

The Streets of Laredo