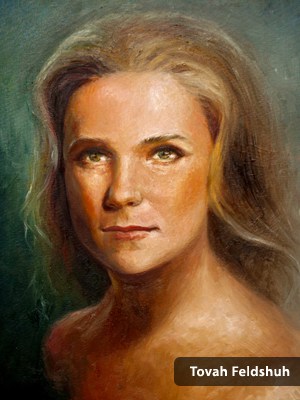 For her work on the New York stage, from Yentl to Sarava! to Lend Me A Tenor to Golda’s Balcony, Tovah Feldshuh has earned four Tony nominations for Best Actress and won four Drama Desk Awards (including one for Golda’s Balcony), four Outer Critics Circle Awards, the Obie, the Theatre World Award and the Lucille Lortel Award for Best Actress (for Golda’s Balcony). Other shows on Broadway include Cyrano (with Christopher Plummer), Rodgers And Hart and Dreyfus In Rehearsal. Tovah portrayed the title roles in the Roundabout Theatre’s She Stoops To Conquer and Mistress Of The Inn. She is currently starring in the critically acclaimed new Broadway play, Irena’s Vow.

Hayyim Nahman Bialik (1873-1934) was considered one of the “fathers of Modern Hebrew poetry,” creating a secular Jewish literature much inspired by, and standing next to the traditional liturgical and sacred writings of the Jewish people. Several of his “lighter” poems are collected as “songs and verses” and, because of their simple structure they lend themselves easily to song settings. “Bein Nahar Prat” is among these, and was adapted to the melody of an Oriental folk song by Yemenite singer Bracha Zefira (1910-1990).

The Ellen P. Hermanson Foundation focuses on three specific areas: – educational outreach about the importance of mammography and early detection to medically under served communities of women; psychosocial support services that address the broad range of issues facing breast cancer patients, survivors, spouses, families, and friends; and research on improving understanding of pain management and methods for treating pain.