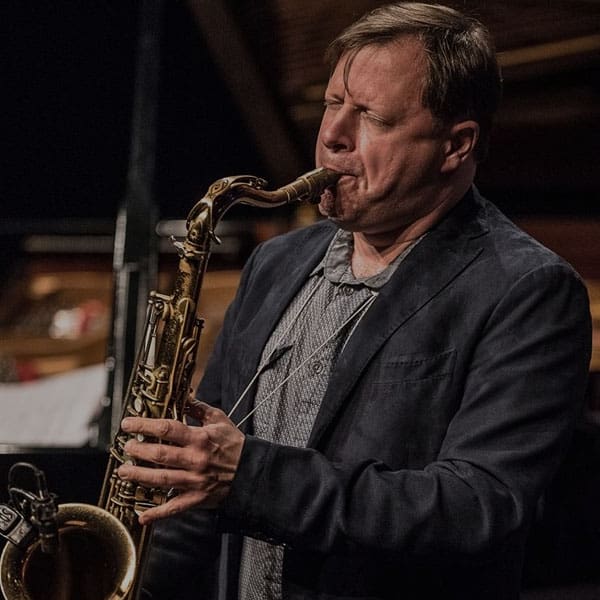 A world-class soloist, accomplished composer and formidable bandleader, saxophonist Chris Potter has emerged as a leading light of his generation. Down Beat called him “One of the most studied (and copied) saxophonists on the planet” while Jazz Times identified him as “a figure of international renown.” Jazz sax elder statesman Dave Liebman called him simply, “one of the best musicians around,” a sentiment shared by the readers of Down Beat in voting him second only to tenor sax great Sonny Rollins in the magazine’s 2008 Readers Poll. A potent improvisor and the youngest musician ever to win Denmark’s Jazzpar Prize, Potter’s impressive discography includes 15 albums as a leader and sideman appearances on over 100 albums. He was nominated for a Grammy Award for his solo work on “In Vogue,” a track from Joanne BrackeenÕs 1999 album Pink Elephant Magic, and was prominently featured on Steely DanÕs Grammy-winning album from 2000, Two Against Nature. He has performed or recorded with many of the leading names in jazz, such as Herbie Hancock, Dave Holland, John Scofield, the Mingus Big Band, Jim Hall, Paul Motian, Dave Douglas, Ray Brown and many others.

Song: Wade In The Water

Contribution to: Be the Match – National Marrow Donor Program

Wade in the Water an African-American spiritual first published in New Jubilee Songs as Sung by the Fisk Jubilee Singers (1901) by John Wesley Work II and his brother, Frederick J. Work (see Fisk Jubilee Singers). The song relates to both the Old and New Testaments. The verses reflect the Israelites’ escape out of Egypt as found in Exodus:14. The chorus refers to healing: see John 5:4, “For an angel went down at a certain season into the pool, and troubled the water: whosoever then first after the troubling of the water stepped in was made whole of whatsoever disease he had.” (from Wikipedia)

About Be the Match – National Marrow Donor Program

As a leader in the field of unrelated marrow and umbilical cord blood transplantation, the National Marrow Donor Program (NMDP)® is dedicated to ensuring all patients who need a transplant receive access to this potentially life-saving treatment. Headquartered in Minneapolis, the nonprofit organization has been entrusted by the federal government through the C.W. Bill Young Transplantation Program to operate the national registry, publicly known as the Be The Match Registry®, which provides a single point of access for transplant centers and patients to marrow donors and cord blood units. The Be The Match Registry provides access to 9 million potential donors and more than 185,000 cord blood units. The organization also facilitates transplants worldwide; supports a global network of hospitals, blood centers, public cord blood banks, laboratories and recruitment centers; conducts research; and provides education and support to patients, donors and health care professionals. The NMDP has facilitated more than 43,000 transplants since operation began in 1987.
(from www.BeTheMatch.org)

Wade In The Water