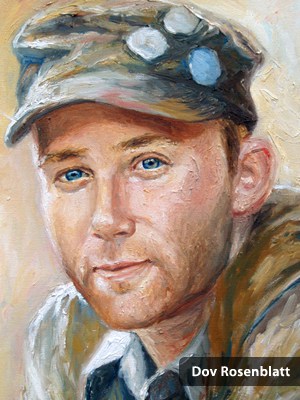 Dov Rosenblatt is the singer, songwriter and rhythm guitarist for Blue Fringe, a popular Jewish rock band hailed as “nothing short of a cultural phenomenon,” having sold over 30,000 albums worldwide and toured the US, Israel, Australia, South Africa, and the UK. Dov also writes, sings, and plays rhythm guitar for his band Fools For April, a folk/pop duo with guitarist C Lanzbom. In the past year, they have had two songs placed on MTV’s “The Real World: Sydney.” Dov is joined here by Dave Richards on bass, and the String Nucleus quartet.

The anonymous “folk song” known as “Kru’im Anu” (aka Halleluyah) is actually the first part of a longer product of the collaboration between poet Avraham Shlonsky (1900-1979) and his sister, Vardina (1905-1990). The far better known older brother made aliyah in 1921 (he had studied in the Herzliyah Gymnasium as a high school student, but returned home and was detained there by the events of World War I) and was a member of a work brigade that blazed trails and paved roads. Shlonsky was one of the first important poets in Israel, and that early work experience likely inspired his writing, much of which embodied the pioneering spirit of the day. Vardina, a pianist and composer, spent time visiting her brother from 1934-1937 (before completing her own aliyah in 1944) and this song is likely from that period. The popularization of the shortened form of the song is a kind of “backhanded complement” to the composer (and poet – the lyrics of the later verses were also lost in the folklorized version), but its appearance in several early collections of Palestinian melodies attests to the extent that at least this reduced version captured the collective sentiment.

Israel Children’s Cancer Foundation provides critical funding to major pediatric cancer centers in Israel. In Israel, approximately 500 children are diagnosed with cancer each year, making cancer the number one disease killer of children in Israel. As the only non-profit organization providing in-hospital care for Israeli children, ICF has made a major impact in fulfilling the dream of giving these cancer-ridden children a “ray of hope” for their future wellbeing.