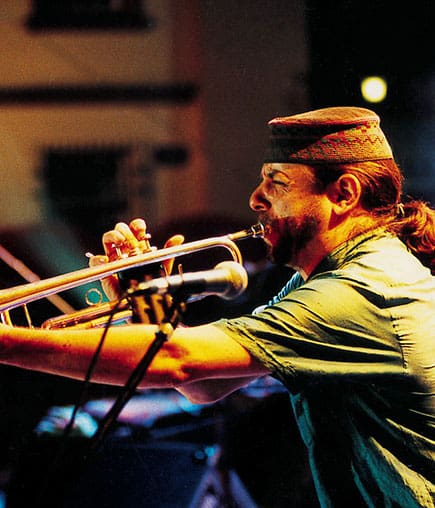 “Gam Hayom” played an important role in the popularization of “Palestinian folk songs” outside of Eretz Yisrael. It was one of several songs that the Jewish National Fund printed on post cards to facilitate easy distribution and dissemination in the early 1930’s. Of course, the song was not an anonymous “folk song” at all (despite its striking resemblance to “Hatikvah”) but was actually composed by Shalom Postolsky (1898-1949) with lyrics by Levi Ben-Amitai (1901- 1980). Both were strongly affiliated with the kibbutz movement, Postolsky at Ein Harod, and Ben-Amitai at Kibbutz Degania Bet. Levi Ben-Amitai (ne Lipa Bravda) was born in White Russia and made aliyah in 1920. His poetry exalts the workers whose efforts helped to build the Jewish homeland, comparing the simple kibbutznik to the Priests and Levites of the Temple in Jerusalem. Postolsky was similarly devoted to evoking and enhancing the culture of the kibbutz, and much of his music is used for kibbutz festivals and holiday celebrations.

The Multiple Myeloma Research Foundation (MMRF) was founded in 1998 by identical twin sisters Kathy Giusti and Karen Andrews shortly following Kathy’s diagnosis with multiple myeloma. The mission of the MMRF is to urgently and aggressively fund research that will lead to the development of new treatments for multiple myeloma. The MMRF is one of the most effective and efficient organizations of its kind, as evidenced by our exceptional accreditations. In 2007, nearly 93% of every dollar of revenue raised was directed toward myeloma research and related educational programs. The MMRF’s approach, with a focus on speed, innovation, and results, is widely recognized across the medical and scientific communities, as well as by several prominent publications, as an optimal model to accelerate medical research and drug development across various cancers and diseases.