Hangin’ with the Homeboyz…. 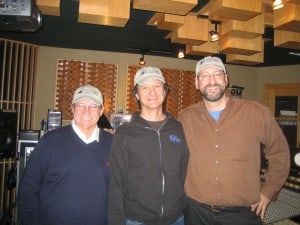 Each artist who passed through Studio A was asked to “sign” our musical guest book, by recording a pass on Am Yisrael Chai-The People of Israel live on! We combined an obscure old pioneer song with a newer, famous tune written by the legendary Shlomo Carlebach, and managed to hear a few tasty licks from just about everybody!

I just got back from 24 hours in LA, where I had the pleasure of mixing the P-FAC anthem “Am Yisrael Chai” with none other than the great Bob Clearmountain and the amazingly talented Keith Olsen, at Bob’s private retreat high in the hills (Thanks Beth, for making the introductions!).
These guys are responsible for mixing and producing some of the greatest recordings of all time, and it was a thrill to have them jump on in and get down with the entire P-FAC family. This was not an easy task, as the project contained over 90 tracks!
Most tunes we recorded consisted of five or six tracks, plus another six if drums were used. Twenty or thirty tracks is pushing it, forty is bordering on insanity, and when we hit sixty our computers were belching smoke.
But ninety….imagine a house where fifty teenagers lived together in one room….now try to imagine straightening up after them……you now have an idea of the task at hand. Bob and Keith did not bat an eyelash as they elevated our monumental undertaking to heights we never imagined. Props to Bob Horn and Brandon Duncan for an incredible display of Pro Tools wizardry. Most of all, to our own Dave Richards, for recording everyone so beautifully, and for his hard work, great ideas and cool vibe, and to DJM, who once again showed why dreamers come out on top. It’s not easy to record 90 tracks, but pioneers do what’s never been done…