Postcards From The Edge 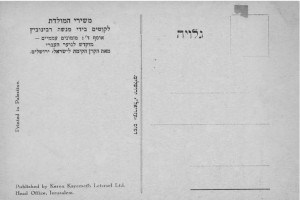 When the first wave of immigrants to Palestine hit the shores of the Holy Land they were pioneers on many fronts. The new settlers, inspired by the leadership of Eliezar Ben Yehudah, started to integrate all facets of their lives with the Hebrew language. Even the old songs they sang and taught their children were given new life by the use of new Hebrew lyrics. The fact that each community had its own melodies, going back generations, became increasingly frustrating as time went on. Regional and political identities became overwhelmingly obvious through the music and dances people used for their all too infrequent social times.

The Keren Kayemet, now also known as The Jewish National Fund, realized that to build a country a common thread was needed, even deeper than the Hebrew language. Only when the settlers were all singing the same songs could real national unity be achieved. They commissioned many composers to compose folk songs that could be sung by all, and taught to all school children. But-how would these songs actually become part of the fabric of Jewish life in the settlements, and around the world?
There was no access to the media, or recording industries, and the digital age of instant distribution was not even a pipe dream. A decision was made to print the melody and words of the songs on traditional 5×7 postcards! Instead of a panoramic scene of the Gallilee, or the sun rising over the Negev, the new folk music of the land of Israel, printed on hundreds of thousands of postcards, ended up in the hands of people around the world.

This amazing and ingenious attempt to manufacture a folk music tradition by design soon came to the attention of Hans Nathan, a musicologist from the Jewish community of Berlin. He appreciated the brilliance of the postcards in light of the strong trends of Nationalism defining much of the recent concert music in the western world. Many well known composers, such as Bela Bartlok, Jean Sibelious, Sergei Prokofiev were incorporating their country’s folk music into their recent work. Nathan was inspired to send postcards to the leading Jewish composers of the day, Aaron Copland, Darius Milhaud,Kurt Weill, Ernst Toch, Stephan Wolpe, and others, asking them to write new works based on these folk tunes.
They did- and the new Palestinian folk music was now art music.

The work of Hans Nathan in turn inspired producer Greg Wall and the Pioneers for a Cure production team to send postcards (by email, of course…) to many of today’s most influential Jewish musical artists. Each artist was invited to conceive and record one song, perhaps recording it for the first time ever. Funds were raised to provide recording studio time, production assistance, and all administrative overhead. People everywhere are invited to join the initiative by purchasing virtual postcards, each containing a downloadable song, from the Pioneers For a Cure website. All proceeds raised from the sale of these postcards will go directly to the cancer charity selected by the artist featured on the card.

In the face of difficult economic times the resources of generous people are stretched in unpredictable ways. Music, art, and culture provide the framework for maintaining the humanity that defines our lives. We hope that Pioneers For a Cure: The Postcard project will inspire people to combine their need for cultural sustenance with an opportunity to help stop the scourge of the cancer crisis.