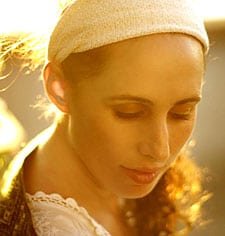 Basya Schechter and her cleverly named band Pharaoh’s Daughter have made a considerable impact on the world/acoustic scene. Her sweet voice, whether together with her full ensemble or in tandem with her guitar, is a pleasure to behold. The pioneer song “Hiney Achalilah Bachalili” ( I Will Play My Flute) is a perfect tune for Basya and company as they turn in a masterful performance that hints of George Martin and the fab four…..all in the name of raising funds for the Breast Cancer Research Foundation.

“Hiney Achalilah,” formally known as “Shirat HeChalil” is one of many odes to the ubiquitous instrument, written by nearly all the important composers of Israel. The term refers variously to the orchestral flute and to the recorder popular among the shepherds who entertained themselves and their flocks as they played. In particular, it was the musical influence of the Bedouin and Oriental Jewish herdsmen that struck an especially inspiring chord among Western-raised composers. The end result was a body of early songs with a decidedly Eastern flavor. “Hiney Achalilah” is a great example of these songs, with its dreamy, almost non-metrical verse, and the driving, debka-like rhythm of its spirited chorus.
Mordechai Zeira (1905 – 1968) is regarded as one of the “fathers of Israeli song.” Prior to his arrival in Palestine (from Russia in 1924) most of the popular songs were set to folk melodies brought from Europe with the new immigrants. It was during the fourth aliyah (roughly 1924 – 1931) that “composed songs” came to be written, and Zeira was one of the most prolific. He was also something of a “troubadour,” popularizing his tunes by singing them as he walked the length and breadth of his new homeland.(MBE)